If you visit our website frequently, you may have noticed that a large number of embroidery and sewing machines we’ve reviewed so far is made by the same company – Brother.

This is because Brother has been practically dominating the (online) market and most of their models are well-rounded, accomplished machines, featuring clever design, ease of use, good performance and competitive pricing.

The machine we’re about to review – the LB6800PRW is a combination (embroidery and sewing) machine with a twist and packing a punch. 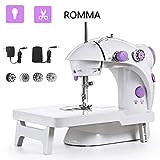 Aesthetically, the LB-6800PRW is not much different than most Brother embroidery machines. It doesn’t really have any stand-out features when it comes to looks, it’s simple and modern-looking and most of us wouldn’t mind having it sit in a corner of the living room.

With the dimensions of 20.2 x 15 x 15.1 inches, the LB-6800PRW is just large enough to remain portable, although we’ve seen much smaller models, but the embroidery area is only 4 x 4 inches, which might turn out to be a problem for some. More about that later in the performance section.

The LB-6800PRW has 67 built-in sewing stitches (utility, heirloom, quilting and decorative stitches) and 70 built-in embroidery designs (holiday, floral, kids’ and animal designs). On top of that, the LB-6800RPW has 5 built-in fonts available, as well as 120 frame patters.

Clearly, Brother have gone out their way to cater to their customers and they’ve really provided us with a ton of useful built-in features.

Computer connectivity is a must these days, so it comes as no surprise that the LB-6800PRW isn’t lacking in this department. As always, a USB cable is included and the user can use it to import designs they’ve made themselves or downloaded online. The integrated software can also be updated via the USB cable.

Since we’re reviewing a special edition product, we have to mention what’s included in the box. A large number of additional accessories comes with the LB-6800PRW, with the most important (and convenient) one being the Project Runaway rolling bag – this beautiful rolling bag allows the user to transport the machine easily, while at the same time ensuring maximum protection.

Although the LB-6800PRW performs reasonably well in most aspects, the size (4″x4″) of the embroidery area might be problematic about this machine, at least for some. It can be argued that this embroidery machine is meant for beginners (and that is reflected in the price), but 4 x 4 inches is definitely not enough space for those of you used to working on larger projects.

That being said, the machine works perfectly well for adding designs to your child’s clothes, or to your napkins and towels – you can even personalize shirts and fabric with lettering and whatnot, but other than that you won’t be able to do much.

The size wouldn’t be a problem if this wasn’t a combination machine – usually, embroidery/sewing machines have a larger embroidery area, so some might conclude that Brother has slightly missed the target with this one.

Since this is a pretty inexpensive machine, one could conclude that this was done to justify the low price (and save money), but intermediate users, used to working on large projects, might find the embroidery area size to be a deal-breaker. Those of you that intend to take up sewing as a hobby, most probably won’t have a problem with the size.

Enough about the embroidery area, let’s see what else this fine machine has to offer. For a start, the LCD touch screen display is intuitive and easy to use, allowing the user easy access to designs, frames and different editing functions (the user can resize and rotate designs and see how they look on the display, before stitching), as well as useful tutorials.

The easy bobbin winding system is another great little feature for more inexperienced users, as it allows the machine to wind the bobbing quickly – all the user has to do is move the bobbin button to the right and then press the Start button.

This is a clear sign of Brother’s attempt to keep things simple and user-friendly, which is something we’ve gotten used to when it comes to this company.

The quick set drop-in bobbin makes using the LB-6800PRW even easier, because it protects the bobbin thread from jamming, while the so called “Smooth Fabric Feeding” feature helps with feeding a wide variety of fabrics. As with most Brother models, the workspace is brightly lit.

Now it is time for our review to take an unexpected turn. If you’re looking for technical information about the LB-6800PRW, feel free to skip the next part. But, if you’re interested in another special edition Brother has recently launched, the information below might interest you.

Those of you running a small business and those of you in need of a more complex machine, we recommend a different limited edition of this machine – the PE770 Grand Slam Package.

Brother have really outdone themselves with the Grand Slam – this is perhaps the best all in one deal one can find nowadays, so it is highly recommended that you check that one out too.

Brother LB-6800PRW is an accomplished machine that offers great value for the money. We’re used to Brother producing high quality embroidery machines, but the LB-6800PRW stands alone, as a combination machine, and it most definitely delivers in almost every department. It is easy to use, beginner-friendly, practical, portable and performs well.

The only downside is the relatively small embroidery area, but since the LB-6800PRW is primarily meant for beginners and hobbyists, this shouldn’t be an issue. After all, this is a limited edition and the fact that this machine comes with so many useful accessories is certainly another bonus, not to mention how competitive the price is.

If the LB-6800PRW doesn’t tick all the boxes for you personally, the Grand Slam edition might just be what you’re looking for.

EmbroideryPress.com is a participant in the Amazon Services LLC Associates Program, an affiliate advertising program designed to provide a means for sites to earn advertising fees by advertising and linking to amazon.com.